77eme Salon des Aquarelistes Lyonnais in the respect of tradition…

The form is not without innovation, but the important is preserved techniques … 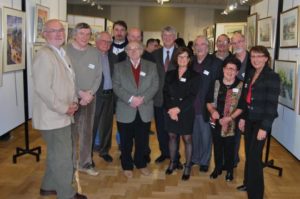 Gilbert Abric manages, through several large formats, to let us read our city and see the layers of architectural traces deposited through the years, especially when we consider his roofs around the dome of Charity.
Philippe Allain always the most able to summarize an emotion in front of an object, as a sort of disciple inspired by Edward Hopper.

There are those who exalt their gestures, as Thierry Grosfilley reflecting the late autumn, a road, a village, salt marshes, a farm, etc., and Georges Boulé whio contemplates Nature: wheat, roses and buttons, the return of the fishermen, etc..

Those who respect tradition around the technique of Flowers, such as Marius Cousin. Thus, he aptly reflects his emotions. His landscapes are suffused with an atmosphere of romantic theater.

President Renée Fra’s-Perret, taking over from Jeannine Gay now honorary president, is a follower of monks painters of the Ming Dynasty. She transmits the essence of a flower or a bouquet with a breathtaking dexterity that does not alter the presence of a poetry of the everyday life that she wants to stress : in my cherry tree in a bouquet, spring 2012, lilacs were beautiful..

All these artists are like filters of time that passes inexorably. There are the applicated, studious ones, such as Gilles Durand, a master whose steady hand is admirable, and André Lebreux who loves water. He focuses on the description of the Dombes, of fog or Winter sunset over the ponds, and tireless Claudius Pralus surveyor landscapes: Lake of the sheep and the Mont Blanc, the Génépi glacier, the mimosas hill etc..

Patrick Galante, who presided in the Regain salon succeeding late Henry Treffel, has often turned to change, to movement, to the quest for new horizons as the mosque or bougainvillea from Brazil.

Two guests selected with vigilance: Alain Fontaine, and Charlotte Le Sage demonstrating her craft and the legitimacy of her presence in evoking a woman in her kimono.

Watercolor as door of worlds

Quiet and mischievous soul, Marius Pierre Cousin works watercolor as Montaigne worked literature : he gives it with a kind humanity, a soft radiance of laughing virtue.

Through watercolor, he combines lightness with depth. Reality colors and turns to his imagination.

The cities see their proportions and color morph. The rivers drift in yellow and blue, steeples punctuate the waves of roofs, domes round and shimmer, windows seem like cat eyes in the night… the watercolorist’s brush becomes a poetry stylus, which lays sketches of reality on paper…

Clever with lines, keen with colors, heedful of pictorial sense, Marius Pierre Cousin gives us much to see and takes us even further. His still lifes carry us beyond the fruit… one feels both the pulp and peel but also the sweetness or bitterness of taste.

As he himself says, he works by touches, by hops… there are several levels of interpretation… one can focus on the lines of bodies, on the edges of roofs, on the fine down of quinces… but one can also get absorbed in background spots and touches… one is then engulfed in a mesh of colors woven by the shimering of water and enhanced by the will of the painter… The colors repel and attract each other… the world boils down to this careful attention that harnesses the strengths of pigments.

The watercolor of Marius Pierre Cousin transgresses the limits of transparency. The colors and forms become manifests and universes. His painting transmits us infatuations, an imagining look. In depth as over the surface, in colors as in lines, one gets involved in the game… with great pleasure.

Jean FLEURY
At Mr Cousin’s, on the slopes of Juliénas’s hills
6 mai 2011 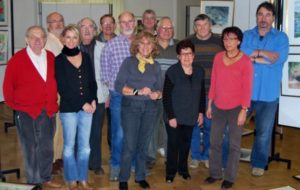 In Lyon, we have painted flowers for centuries but also delicate fruits, generous vegetables, flowery branches that the Chinese and Japanese traditionalists envy us

The watercolorists honored at the 28th Painters’ exhibition 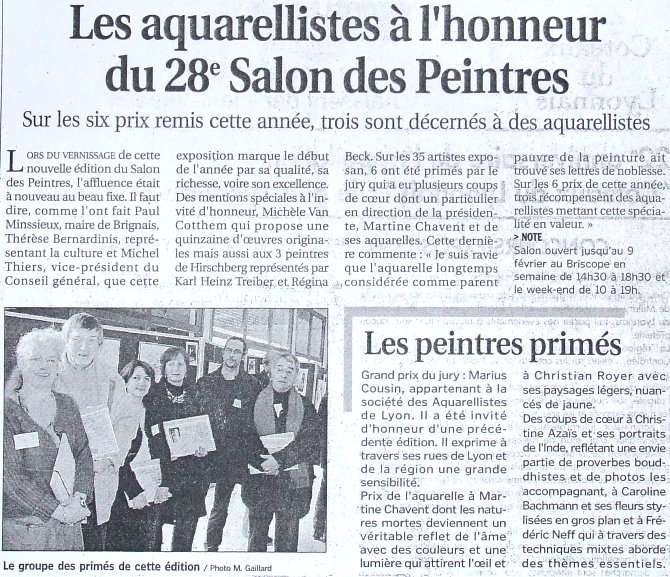 Of the six prices distributed this year, three were awarded to watercolorists

At the time of the vernissage of this new edition of the show of the painters, the crowd was present again. One must say, as did Paul Minssieux, mayor of Brignais, Thérèse Bernardinis, representing culture and Michel Thiers, vice president of the general Counsel, that this exhibition marks the beginning of the year by its quality, its diversity, indeed its excellence. Special mentions to the honor guest, Michèle Van Cotthem that proposes around fifteen original works but also to the 3 painters of Hirschberg represented by Karl Heinz Treiber and Régina Beck. On the 35 artists exposing, 6 were distinguished by the jury that had several heart blows of which a special heading for the president, Martine Chavent and her watercolors. She comments on: “I am delighted that watercolor, long considered as the poor parent of painting, found its nobility letters. Of the 6 prices of this year, three reward watercolorists putting this specialty in value”.

Grand Prix of the jury: Marius Cousin, belonging to the Watercolorists Society of Lyon. He was the honor guest of a preceding edition. He expresses deep sensitivity through the streets of Lyon and of the region.
Watercolor Price to Martine Chavent whose still frames become a true reflection of the soul with colors and a light that catch the eye and to Christian Royer with his light landscapes, shaded in yellow tones.
Heart blows to Christian Azaïs and his portraits of India, reflecting a desire stemming from buddhist proverbs and photos accompanying them, to Caroline Bachmann and her close-up stylized flowers and to Frédéric Neff who approaches essential themes using mixed techniques.

Marius-Pierre Cousin or the art of watercolor

“La buissonière” proposes until December 23 an art exhibition devoted to Marius Pierre Cousin, watercolorist of great talent, and who was present at the time of the vernissage that took place recently. Member of the “société des aquarellistes lyonnais”, Marius-Pierre Cousin inspires himself with landscapes of the region. Thus, through paintings with evocating titles such as “The rock of Solutré”, “Winter in Lyon”, “Mâcon seen of Saint Laurent”, or else “Rain on Chalon”, natural sites of a great beauty are thus sublimated by the delicate touch of the painter who always elaborates sketches beforehand. Nevertheless his pictorial works also cover nudes, still lives, portraits, and urban scenes. Charming watercolors therefore according to the terms of many come to discover the exhibition of the artist, comprising about twenty paintings for sale. “La buissonière” is opened Tuesday to Friday from 9h30 to 12 o’clock, and from 14 to 19 o’clock, and on Mondays from 14 to 19 o’clock.
Marius-Pierre Cousin, to the right, paints since his childhood. 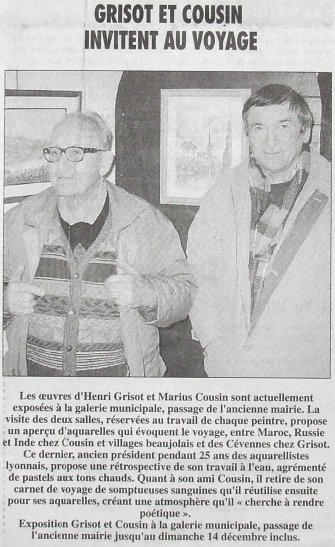 GRISOT AND COUSIN INVITE TO TRAVEL 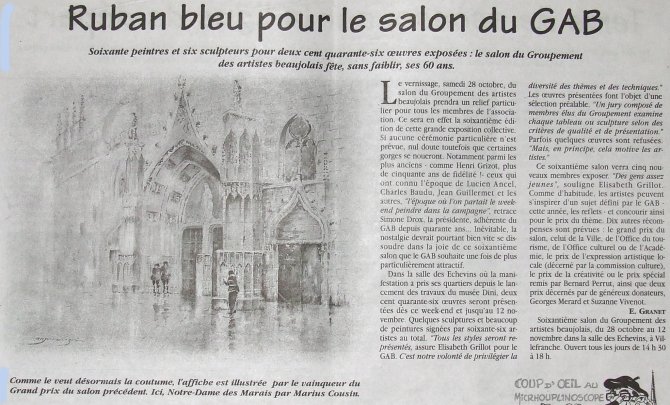 Blue ribbon for the exhibition of the GAB

Sixty painters and six sculptors for two hundred forty-six exposed works: the exhibition of the Grouping of the Artists of Beaujolais celebrates, without weakening, its 60 years.
…
As wants henceforth the custom, the poster is illustrated by the winner of the Grand Prix of the preceding exhibition. Here, Our Lady of the Marshes by Marius Cousin. 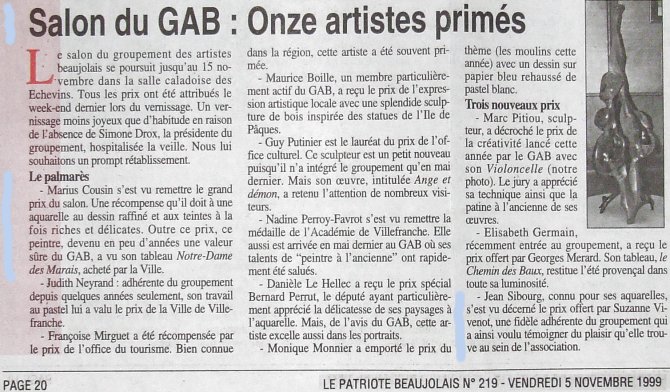 …
The list of awards
– Marius Cousin saw himself awarded the Grand Prix. A reward he owns to a watercolor with refined drawing and rich and delicate colours. Besides this price, the painter, who has become in a few years a sure value of the GAB, saw his painting “Our Lady of the Marshes”, bought by the city.
…
– Jean Sibourg, known for his watercolors, saw himself awarded the price offered by Suzanne Vivenot, an faithful member of the GAB that thus wanted to express the pleasure that she finds within the association.